What, how and who is Zero Day?

Almost three weeks after our announcement of Zero Day, it’s high time we start talking about it. We plan to be transparent with our development, which is to clearly discuss our work, on a weekly or bi-weekly basis. After this post, check back next week where we discuss our work behind one of Zero Day’s planned weapons; the Ion Cannon.

What is Zero Day?

Found throughout this website, are mentions of Zero Day’s gameplay. Without getting too specific, I’m going to explain the current intention behind what Zero Day is, and what it’s not. We’re going to save some of the juicy detail, especially regarding the core game loop, for further down the road.

To repeat the game’s short description; Zero Day is a cyberpunk-themed, objective-driven looter-shooter. Let’s break down what that means. Zero Day, thematically, is heavily inspired by Dystopia, a cyberpunk-themed modification that the senior developers at Puny Human worked on as junior developers, prior to, during and after it’s full release in 2007. Dystopia’s cyberpunk theme is central to the aesthetic of the game and the mood of Zero Day. There are lots of flavors or offshoots to cyberpunk; post-cyberpunk, retro-cyberpunk, nanopunk and transistorpunk… the list goes on. However, we consider the universe of Zero Day to be a cyberpunk in the traditional, dystopian sense. There is crippling wealth inequality, a cybernetic union between man and machine, and most importantly, brutal totalitarian control by mega-corporations. Zero Day is heavily inspired by media with this style of cyberpunk, such as Altered Carbon, Blade Runner/2049, Ghost in the Shell, and Snow Crash.

Various cyberpunk media that have served as a major inspiration.

Zero Day is objective-driven. That aspect was our favorite feature that made Dystopia unique, and thus it has motivated design on Zero Day. The gameplay of Dystopia could be described as a round-based, asymmetrical, objective capture team game. It was similar to modern titles like Dirty Bomb or specific modes of Team Fortress 2. In Dystopia, one team acted as attackers and the other defended, fighting over objectives before time ran out. However, this time around, we’re developing a fresh perspective to objective capture team games.

In Zero Day, there are five teams that start on the outskirts of a large map. After spawning, teams must complete objectives and defeat enemy AI, in order to earn credits, crafting material and loot. This is where the looter-shooter element comes in. Teams capture objectives and fight toward the center to acquire the “Zero Day object,” along the way obtaining stronger and more valuable loot.” Upon retrieving the object, teams then extract and leave the round, earning a bonus for the order in which they escaped with the Zero Day object.

Meanwhile, the other teams vie for their placement, in an attempt to earn a higher score and more credits and in-game cosmetics. Like in Dystopia, combat occurs in the “meatspace” of the real world or the electronic reality of “cyberspace.” Success can only be achieved by regular communication and good strategy 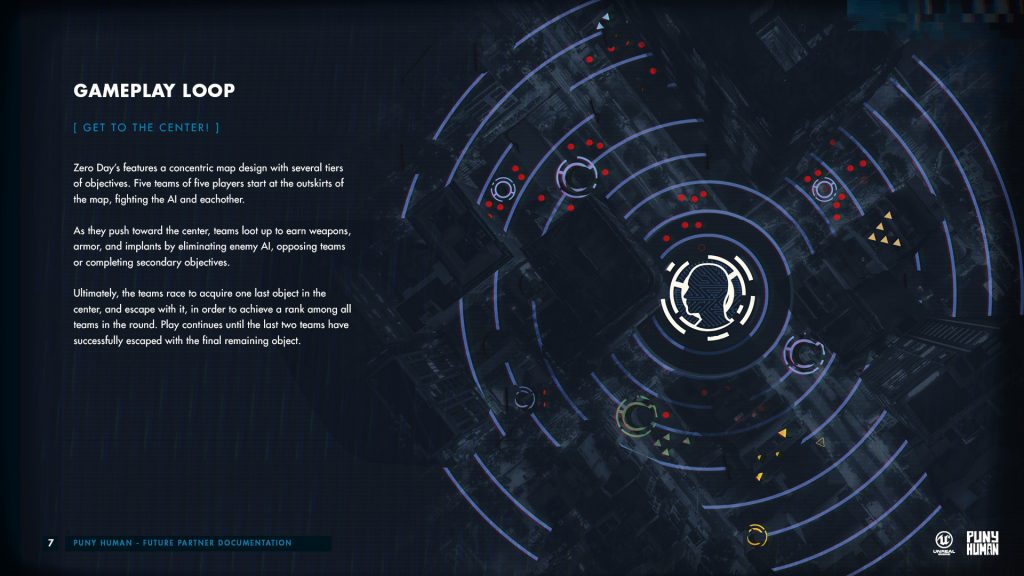 A slightly redacted excerpt from our partner documentation pitch presentation.

If you’re curious about how respawning works, the game’s objectives, how implants operate, the weapons available, and even if classes exist, you’ll need to stay tuned. We will be revealing more of what we’ve built over the last 11 months, on this website.

As mentioned above, we’re doing our best to remain as transparent with our development. What that means to us is that we will share as much information as possible, as often as possible. Whether that information relates to something that will actually be in the game, or not, is up for time to decide. Everything is subject to change, nothing is final. We’ll be posting weekly or bi-weekly on this update blog, in order to give a sense of re-occurrence to fans of Zero Day, and hopefully to keep you coming back.

Currently, most of the Puny Human staff are engaged with our wonderful partners, working on titles like Wasteland 3, Trover Saves the Universe and The Bard’s Tale IV. As a result, much of the work occurs in our spare time or by those not working on those titles. However, there is 9 months of ideation, prototyping, concepts, models, design theory, and more to shed light on. That’s why next week, we’ll be talking about the Ion Cannon, and hopefully the following week, delving into more.

Who is developing Zero Day?

As mentioned, Puny Human is primarily working with great partners. However, that doesn’t fully describe the team on Zero Day. The current principal team consists of only those involved in the planning, design, and artistic vision for Zero Day, who’s breadth of talent runs the gamut.

As an initial development update, I hope that you feel somewhat more informed as to what Zero Day is, who is making it, and how.