Early last year, as the Zero Day team was forming, the question of establishing an art pipeline came up. Video game art pipelines are more than documentation or a process about implementing assets. A solid pipeline references everything from the politics of a fictional world, to color standards in use on a gun’s metal. It encapsulates many facets from lore, design, engineering, or even the build process. The Zero Day team felt creating an asset from start to finish was a good opportunity to develop and iterate on the art pipeline.

There was little intention from my role as Producer, to keep the art that was produced from this trial-run. My hope was to view the process from the lens of the people. How did we discuss the task during its progress? How did we interpret feedback along the way? Who listened and who spoke the most? Ultimately, the operation proved better than expected, and we came out with a usable final asset for the game.

In May of last year, we started with the inspiration behind the piece; the first-generation of Dystopia’s Ion Cannon. Leading up to its full “Version 1” release in February of 2007, Dystopia had a different model for this weapon. The Ion Cannon was eventually replaced, but was fun to use and good to look at artistically. At the time, it didn’t provide much feedback on its reloading or firing state and felt a little rigid. So, we felt we had another chance to add that feedback in creating an Ion Cannon for Zero Day.

The first step was to reach out to the first-generation Ion Cannon’s creator, Da Feng. It was important for us to capture some of the original intentions with this model, and address the pitfalls with its implementation. We’ve been happy to have him along ever since, to provide feedback and support for our process.

In hindsight, the Ion Cannon was created with two early design decisions in mind, that have since been altered. In an upcoming update, we’ll explain the early ideas for Zero Day. Part of the initial design was to be a hero-shooter like Overwatch or Paladins. However, after discussion we opted for a different path. As a result of this design choice, the Ion Cannon for Zero Day was created under the assumption it would belong to a distinct playable character.

Next week, we’ll discuss the initial character design in Zero Day. To give early perspective to that, we adopted a strict shape standard. Straight, hard lines for the “Corp” team and soft, rounded parts for the “Punk” team. We have since shelved that aesthetic. With this early design decision, we chose the first generation style for a reference. Armed with that information, our concept artist, Donovan Valdes, went to work. 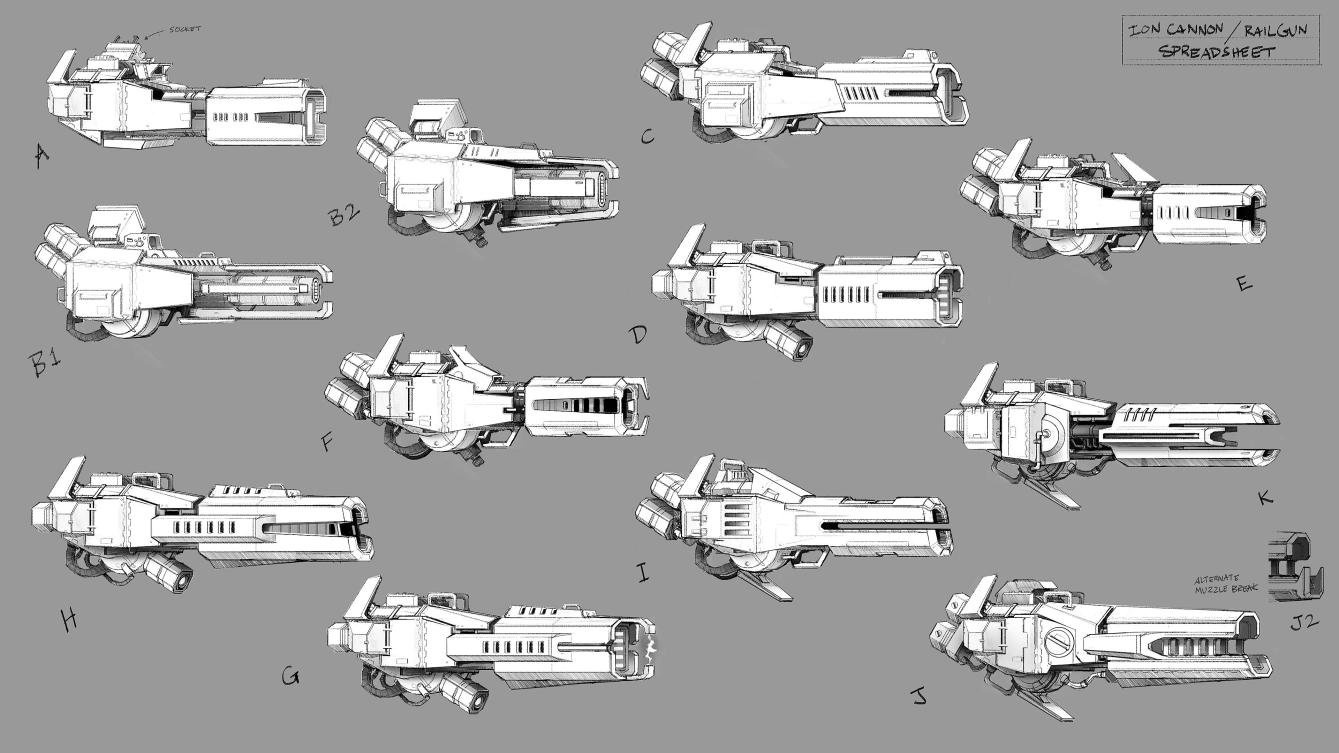 Donovan quickly produced numerous sketches for the team, varying in style. You may notice in the image above, that the Ion Cannon was referred to as a Railgun. During the design of the Ion Cannon, we discussed a simple weapon customization mechanic. Our idea was to allow the player to swap out the front part of the weapon for multiple variants. The back part of the weapon, containing energy-cells, would act as a power source to whatever lethal delivery device was attached at the front. Ideas included a Railgun, Sonic / Percussive energy weapon, Gel Howitzer and a Spider Grenade Cannon. 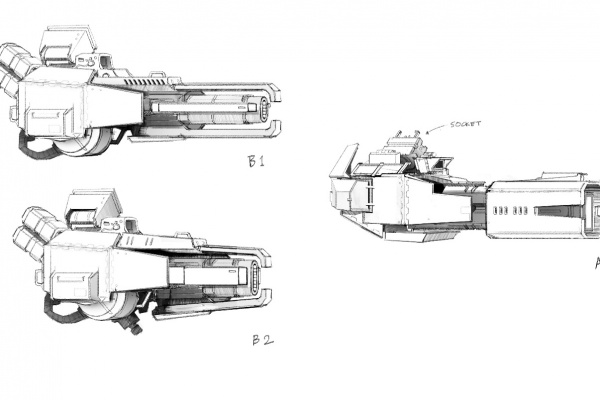 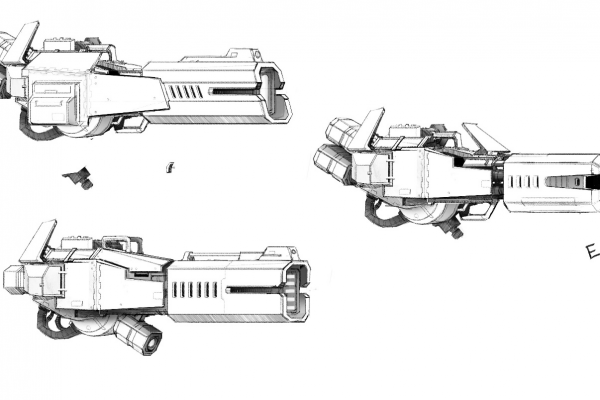 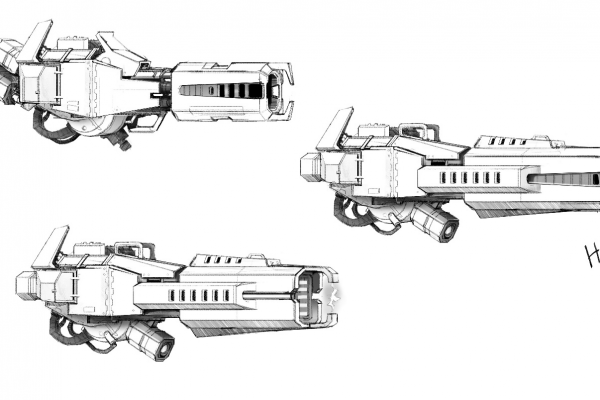 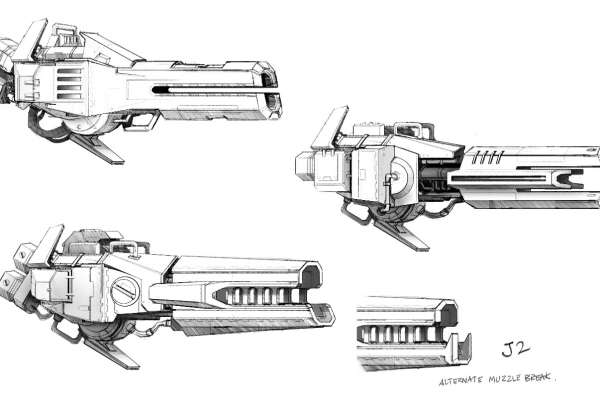 Shown above, there are numerous issues to consider. Where should cabling or exposed wiring exist? Do we want to keep the silhouette produced by fins or cylindrical attachments? What is the intended shape of the end of the barrel? How many ventilation ports should it have? We decided that it was important to first create a strong “base” for the weapon. As the front changed, so would the shape language, so opposing players could easily distinguish what was being pointed at them.

After receiving iterations of the initial sketches A through E, close to two weeks of discussion took place. Sketches F through J certainly represented more diverse silhouettes, exposed portions and less complicated detail around the barrel. Each individual sketch contained something the team felt useful to keep in the final piece. For example, the bottom handle, bottom fin, and the arm mounting point from K, J and B1/B2. 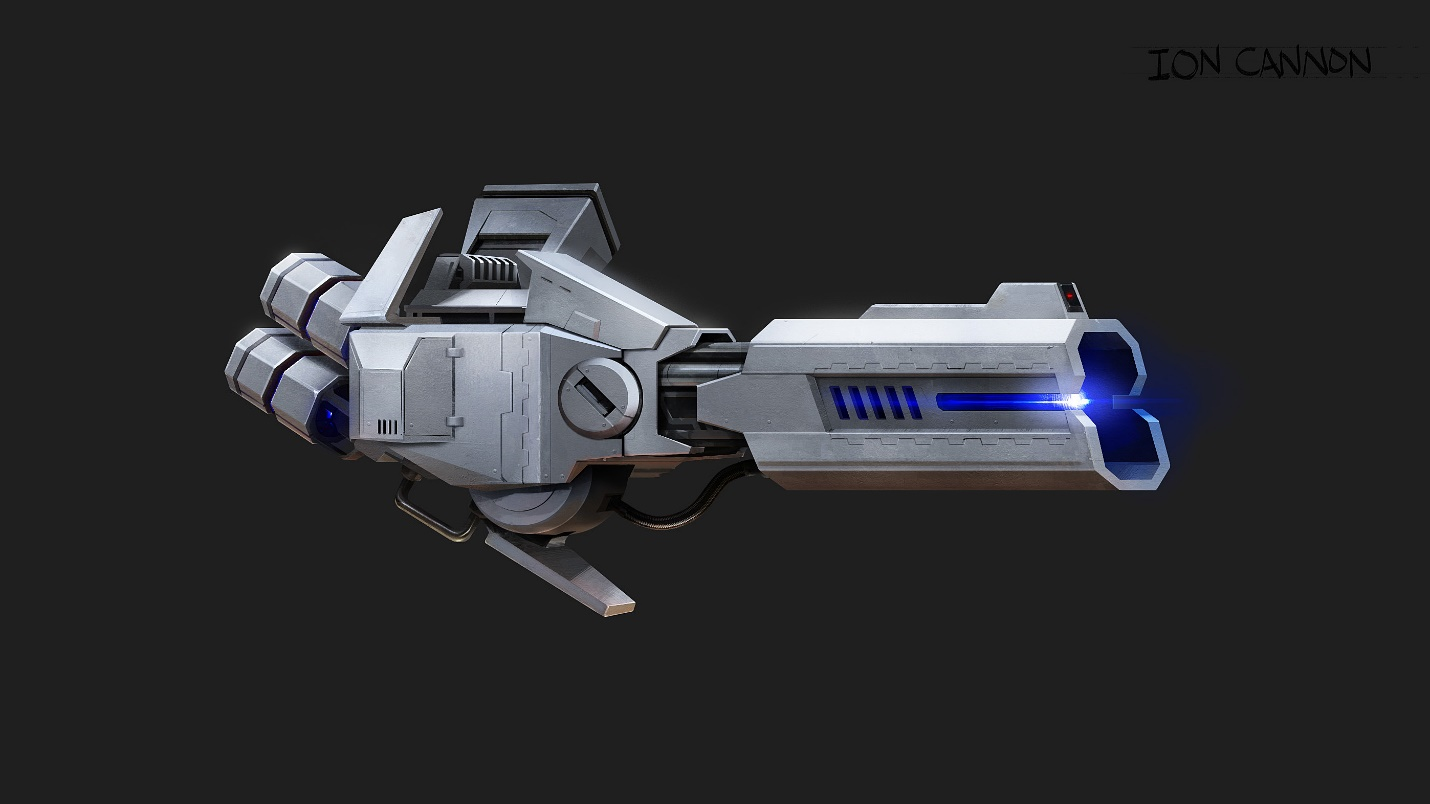 We quickly made decisions on the features to the Ion Cannon, what their purpose was and how the weapon would behave in-game. Next, a colored version was produced so that the team could understand how the asset would appear. One of the issues for debate, was how the player could tell they were reloading or that the weapon had fired. Animators are going to need the concept to appear to have more moving parts so that player’s have good feedback when they unleash hell. The final concept of the Ion Cannon contained more spacing between the barrel and the power-plant for the weapon, so that the front portion could slide back during reload. 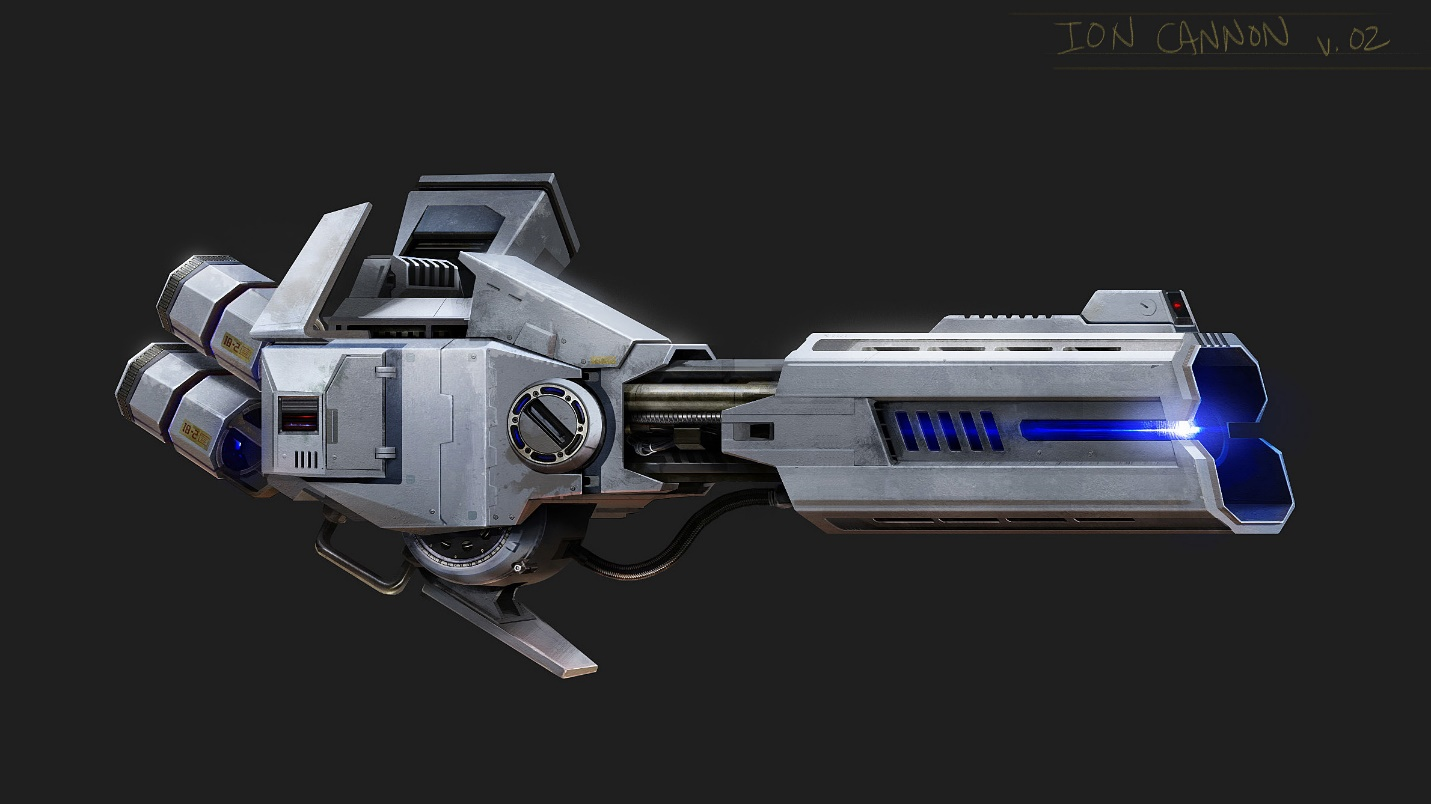 Now that the sketch was complete, it was off to one of our good friends and best-in-the-biz Warren Marshall. In the very least, getting a mesh fully modeled is incredibly valuable, because it reveals issues during concepting. Doing so helps to also get a sense of scale, and peer into areas of the weapon that were otherwise unknown. Warren’s so experienced in this area, that he knew he could turn to Donovan’s expertise and also improvise where necessary.

Problems with the pipeline

The art pipeline began to show its weaknesses during the work to create a final Ion Cannon concept.  Now that this idea was in the hands of Warren, we knew the fun was just beginning. For instance, requirements given did not fully entail detail about areas not shown in the concept. What does the weapon look from the opposite angle? From on top or below? Does the inside of the barrel have anything within it, and where do the cables go? Warren was able to take creative liberties to provide a finalized asset. After all, he’s been in the industry long enough to know how the unseen parts of a model can be extrapolated from those seen. 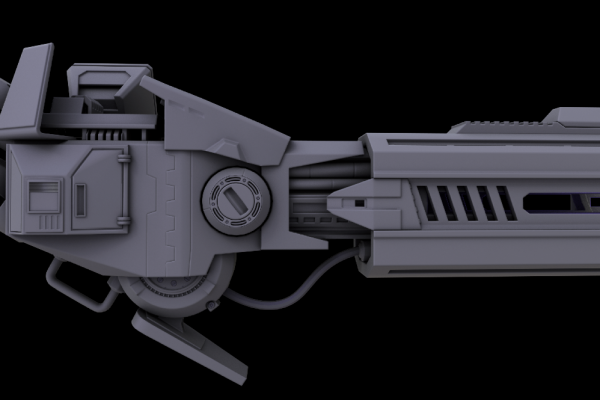 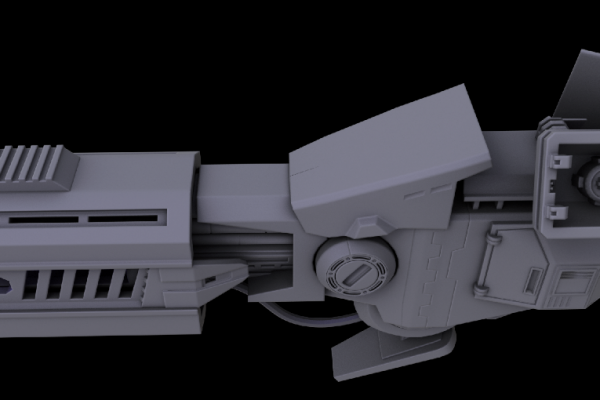 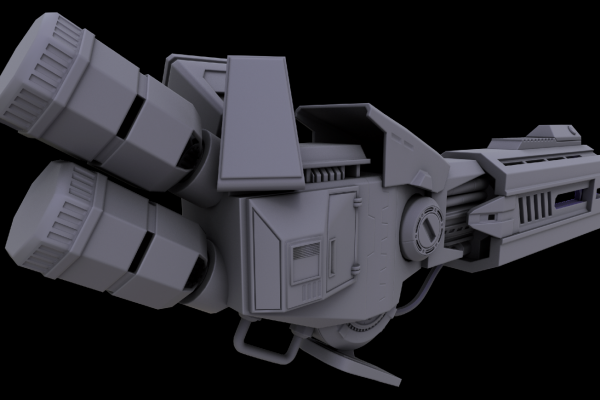 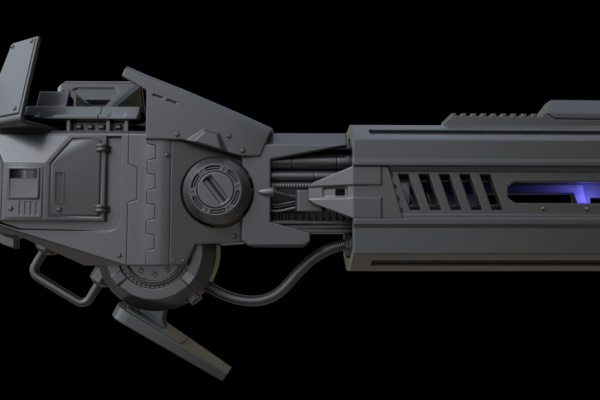 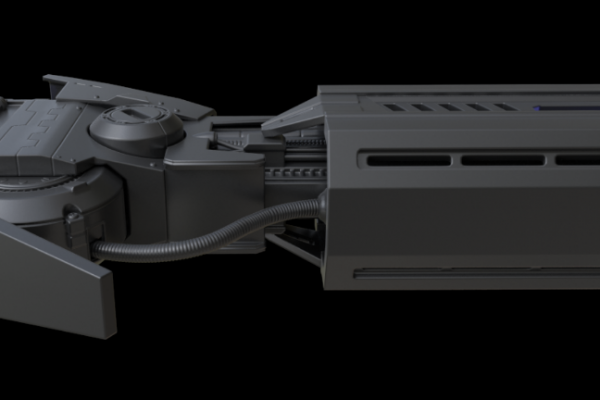 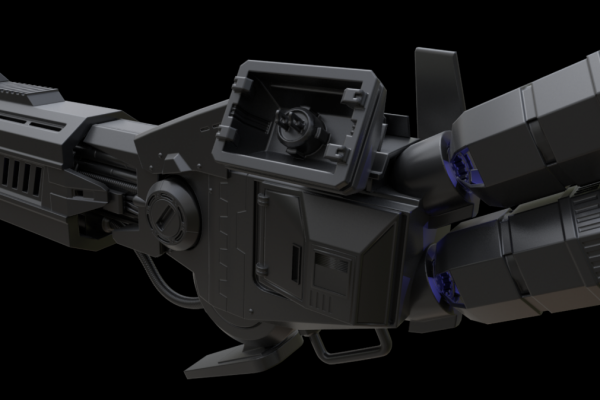 Modeling of the Ion Cannon from this point was an easy affair, if you remove the fact that we didn’t capture all perspectives. The team didn’t provide too much feedback during this process, because we didn’t have much to give. We were witnessing the importance of having a great concept. Upon receiving final screenshots of the Ion Cannon, the team decided that color changes should take place. For a story and functional benefit, we decided to make the Ion Cannon textures consistent with the character it would be attached to. Finally, the team had created their first final asset usable in Zero Day. 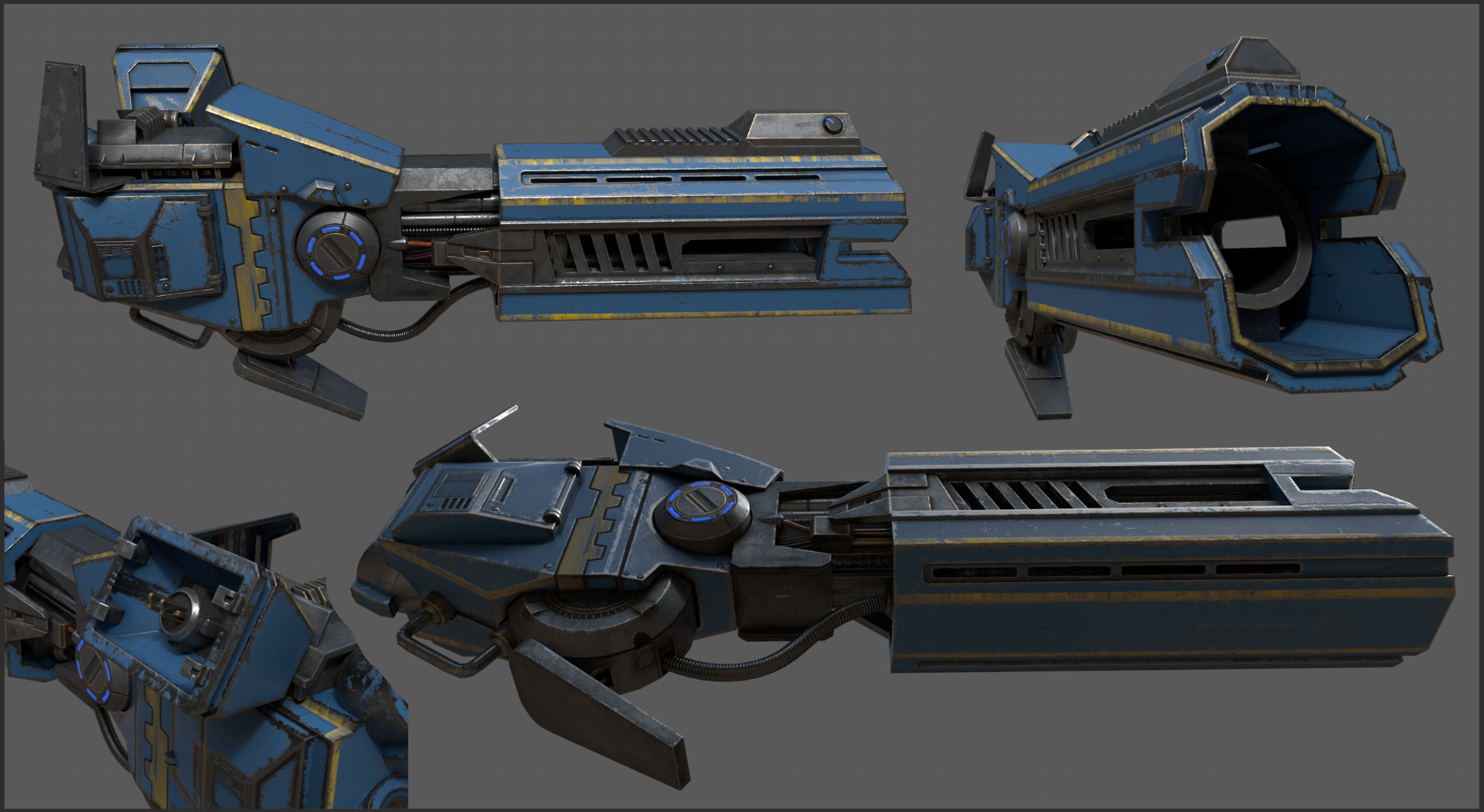 Going through this entire process as a team taught us many things. Since 2015, Puny Human has been primarily made up of engineers, so having a team of artists that have never worked with each other was educational. We knew that on future concepts, we would attempt to describe shape language and intended silhouette early, provide concepts from multiple angles, and stick to the scope of the original goal of creating a single weapon. In the end, many lessons were learned and the team was better equipped to handle future tasks; a core value of working at Puny Human.